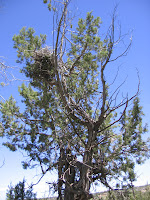 I awoke early one morning at the end of May to lots of squawking from the Magpies that built a nest in one of the Utah Juniper trees near the house. I glanced up to see a huge turkey vulture glaring down from the cottonwood tree, but that was not what was upsetting the magpies. Instead, one of the chicks had died. One by one, each of the dozen magpies in the yard would fly up to the next and cry loudly for a minute, and then fly away. Magpies are one of the few species that have documented behavior of a funeral (although many species have been shown to display grieving behaviors).

For a few windy days, we've also experienced strange, smoggy skies from the Wallow Fire in 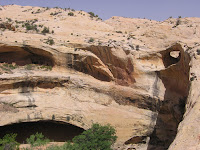 Arizona. Most of the southwest has been very dry this year, so wildfire is a big concern. Over the Memorial Day weekend, gusts of up to 50mph were stirring up dust and sand across the Four Corners. We had decided to visit the canyons of Utah to explore some ancient publeoan ruins. As we hiked Mule Canyon and Butler Wash, the sky was a salmon-grey color and occasionaly sand would sting the eyes and a hat would careeen down the canyon. It seemed fitting weather for exploring 1000 year old cliff dwellings.
The morning we hiked the northern reaches of Grand Gulch, the skies were clear blue and wonderfully cool. We saw several interesting ruins, some with kivas that had views of an arch, and another with a turkey-pen still intact. Everywhere there were sherds of pottery, corn husks, 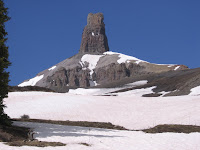 and charcoal fragments. A few ghostly handprints and other art were drawn on many of the cave walls.
The mountains are still too snowy for hiking above 9000 feet, but that didnt stop us from trying. We hiked to the base of Lizard Head in drifts still as much as 4 feet deep! The whole mountain side was flowing with meltwater, so it'll be muddy for a few more weeks. Any suggestions for next weekend?

This Wednesday, June 15th, will be a great chance to see a total lunar eclipse, and get ready for a Vesta Fiesta soon as Dawn releases its first images of Vesta.