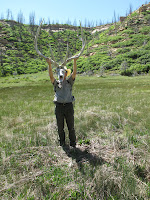 Seeps and Springs monitoring has begun! This involves hiking out into the backcountry to springs that were known in the past and measure their current water flow. For Mesa Verde, often the flow rate is slower than a trickle, just enough to keep the sand damp; hence the term "seep". These springs are important for wildlife and can host isolated populations of riparian plants and animals, such as the Utah Tiger Salamander.

Often, many of the springs were known to the ancestral puebloans, so it is not uncommon to find archeological sites on or near the springs. One spring in School Canyon is along an outcropping of clay soil that looks like it had been an area were clay was collected for making pots or perhaps stucco. Pottery sherds littered the ground and a few areas look like they may have been firing 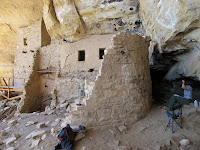 pits. Other springs we monitor are at more famous cliff house ruins, such as Balcony House and Spring House. These springs were considered sacred, and still are revered by modern pueblo tribes. It is not uncommon to see offerings of shells and turquoise associated with them. Archeologists (who were mapping the Spring House ruins with a camera to track how cracks in the walls were changing over time) were gracious enough to invite us behind the leaning tower and see the spring hidden behind the walls. According to archeologists, the columns supporting the ancient roof there are rare to find outside of a kiva, so it is likely the spring chamber was a place of worship too. 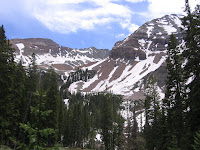 On the solstice, I went on a survey to listen for the calls of the Mexican Spotted Owl. The Spotted Owl had nested in the park up to 2006, but it has unfortunately not been seen since. Before sundown, we had some time, so I helped the biologist set a few live traps to remove desert packrats from the Spruce Tree House structure. Walking behind the structure; snaking through tiny doorways in dusty rooms, and seeing the last rays of the solstice sun make beams of light on the back of the cave, was a fun experience. We heard poor-wills, great-horned owls, and a western screech owl, but no spotted owls. Let's hope for next year!

Another interesting research task was surveying the only known population of Acer grandidentatum (Bigtooth Maples) in Colorado, which exist along the north escarpment of Mesa Verde. A wildfire had swept across the ridge in 2006, which reduced the population size from 100-300 to 6-10. We had searched about 25% of the known area and found 3 saplings, so there's hope a few more are to be found when we complete the search.

Hiking out and about in the Four Corners always feels like discovery could happen around any corner... lots of geology, archeology, and varied biology lend itself to this feeling. In fact, Al Schneider, self trained in botany, has discovered a new species in the area: Packera mancosa -- the Mancos-shale Aster. So, with renewed enthusiasm, I am teaching myself botany in hopes I can both key plants out and learn what's going on all around me.

But perhaps the most exciting chance at discovery for the average Joe has been launched: imagine you have joined the crew of a sailing ship, exploring uncharted waters to a vaguely known destination. The captain asks you to man the lookout, your mission is to discover new land and steer the $650 million ship traveling at 150 times faster than a speeding bullet to the hitherto unknown destination... your only charts to study are some hazy projections pulled from Magellan's library.

Yes, this is an unprecedented chance for some schmuck like me to not only discover a new planet (ok, a minor planet like Pluto), but have it visited shortly after discovery. Icehunters here I come!
Posted by Mangrove Tom at 12:38 PM