Into the Big Blue 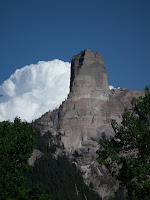 The Seeps & Springs monitoring has completed. We were able to combine the activity with some rare plant survey work as well. As always, it's a fun assignment, since we need to find routes into the back-country canyons that are seldom visited. We were able to locate a rare orchid, Epipactus gigantea, aka Giant Helleborine. Some of the routes through the canyons were challenging, but adventurous, we passed by many ancient ruin sites along canyon walls and hunted through thickets of Rhus toxicodendron (poison ivy) as tall as us.

For the holiday weekend, we met with family for a campout at Silver Jack reservoir. My orchid radar must've still been tuned, for we hadn't been 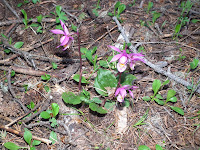 there for more than 30 minutes before we found a nice patch of Calypso bulbosa (Fairy-slipper orchid) blooming in the woods next to melting patches of old snow drifts. I had been to this area a few years ago (thanks, bro!) to climb Courthouse and explore the area. This trip the goal was to dabble into the wilderness to see what the proverbial bear could see.
We hiked along the East Fork of the Cimmaron river for 6-7 miles before turning back. The snow melt along all the ridges provided 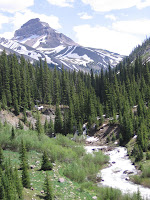 us with a grand total of 27 waterfalls seen along the hike. Only 3 of them appeared large enough to last all summer. To celebrate the end of the trip, we had planned to soak in the Ouray Hot Springs, but the pool was beyond crowded. After a huge meal and a marzipan mouse, we left happy.
And now for my 4th of July Soapbox edition: Local geographers really need some imagination! If I had a nickel for every Bear Creek, Clear Lake, Lookout Mountain, Turkey Gulch, etc... I'd have enough to pay a therpist for all the angst these repetitive names cause me. Each county here has a Bear Creek Trail, so that's 4 Bear Creek Trails within a few hours drive... Sunlight Mountain, Storm King Peak... you'd think those would be slightly more original, but there's multiples within the Colorado Rockies. Equally 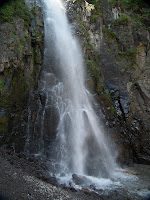 mind-numbing is naming a natural feature after a person. Lame! So I propose geographers comb through this lousy nomenclature and put at least 5 seconds of thought before giving a major landmark a name.
Which is a nice segue into my next rant. Botanists, get your taxomy stable for once! Not only are the names churning constantly, but even the family definitions are fluid. I know there's good reasons behind some of the churn, but some of it is just stubborness and following rules for the sake of rules. Easy for me to complain about, but common names sometimes seem more useful (although some are miseleading, redundant, and worthless too). Still, it's strange to express disdain for regional common names when the scientific names are regional and temporal.

Finally, I'd like to wish STS-135 a wonderful flight as Atlantis and the space shuttle fleet flies for one last time into the Big Blue.