This is George T. Mouser; cat, companion, and fuzz factory.


George was as friendly of a cat as you could ever hope to meet. I found him in an animal shelter in Texas 18 years ago, and he'd been purring ever since. If you ever found a cloud sailing overhead with a touch of grey, that was probably motes of his cat fur that have been circumnavigating the globe for the past decade.

There's so many memories he gave us, like the time he came home pink (still a mystery), the time he summoned satan to scare away an opossum, the time he bawled like an evinrude outboard gettin bogged down in the mud (and was so mournful I had to stop the car to tell him he was a good boy), the time I patrolled my neighborhood until 3:30am to bring him in before a huge storm to find him up on a roof, and that he never once tried to hurt anybody -- including the many vets that poked & prodded him painfully, and being the best nap kitty in the world.

George began slowing down past Sunday evening. By Tuesday evening, it was clear he needed to see a vet. He was in Complete Renal Failure, and despite several days in the hospital, there wasn't anything that could be done to help him. He rallied a few times and tried so very hard to eat and drink for us, but since he could barely walk, losing energy, and in discomfort, we agreed it was time to let him rest.

We found a nice place to bury him in the mountains, close to heaven in a shaded grove with wildflowers blooming all around. If you ever find yourself in a field so beautiful and find a ring of small stones, say "hi" to George and tell him we can't wait to see him again. 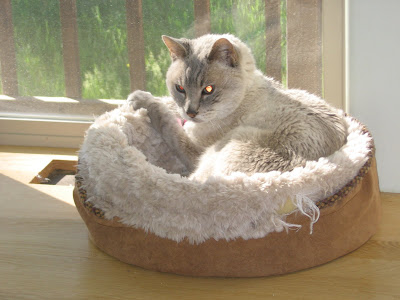 We miss you George, rest in peace.
Posted by Mangrove Tom at 10:07 PM