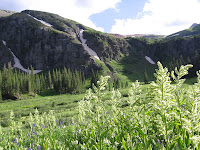 It's about time to post an update before the clamor of blog readers impatient for the next post becomes too much to bear.

It's the final week of my season here at The Rock. I've finally managed to explore some new areas of the Verde, such as Park Mesa, Battleship Rock, south Long Mesa, and south Prater Ridge. I've learned a little more about archeology and a lot more about plants. Projects are winding down, with our Long Term Post Fire Monitoring study complete, rare plant surveys completed, and most of our major re-vegetation projects finished. 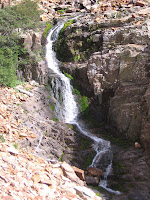 On the weekends, we've revisited a few nice sites, such as Ice Lakes, and explored new areas, such as Owen's Basin, Crater Lake and Cajon Canyon. The weather has been fairly stormy this past month, with a chance of thunderstorms each day that keeps us on our toes. We've been rained on every hike, even when traveling into the normally dry canyons of Utah.

Now it's time for the Philosopher's Corner: What's the deal with exotic species?

There is a difference between non-native and invasive, and it related to the amount of damage the species is expected to cause. In the case of managing a natural area, damage is often to the biodiversity and function of the ecosystem. A non-native species may exist in a natural habitat and not cause undue damage, or perhaps even enhance the stablility of the ecosystem, such as the african violet or european honeybees. But a species that works to unbalance an ecosystem can destroy the biodiversity or even change the fundemental nature of the ecosystem. 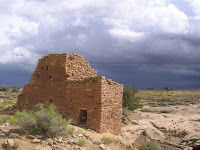 Good examples of this type of damage can be found in Cheatgrass in western states, or the Paperbark tree deliberately introduced into the Everglades. In the case of Cheatgrass, it acts as a fast-growing annual that dies back in the summer. Aside from it's ability to crowd out native annual plants, the potentially more nefarios problem with this growth pattern is it creates a catatrophic flash-fuel type into ecosystems not adapted to frequent wildfires. Mesa Verde National Park has old growth Pinyon-Juniper woodland with the only surviving relic stands of Bigtooth Maple trees in the state. There are many species of endemic plants such as the Cliff Palace Milkvetch and Mesa Verde Stickseed. The presence of cheatgrass has resulted in wildfires being both more frequent, more intense, and having the ability to spread across terrain. Over the past 30 years since cheatgrass has appeared in the park, fires have destroyed almost 50% of the old growth forests and cheatgrass is more prevalent. Thus cheatgrass passes the first two tests of a noxious weed for management decisions here: does it impact the ecosystem? is it's trend increasingly problematic? 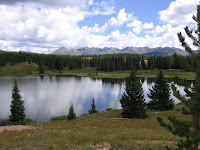 The Paperbark tree was intentionally introduced into Florida as a fast growing tree that could lower water tables and there make land available to agriculture. It worked extremely well... too well, since it escaped the private lands it was introduced on and spread across the state. Lowering the watertable to a wetland and shading out understory plants is obviously a game-changing problem for most of what makes a swamp a swamp. Both the structure (watertable) and the composition (species composition) are changing and biodiversity decreases.

So these two examples pass the test of being noxious within the parameters of a given ecological community (a biome), and get branded as invasive. Before a land-manager decides to start tackling such a problem, there's a lot more decisions to be made first. How much of the management area is currently disrupted, what charactertics are resulting in the spread, and what difficulties would there be in treatment? For now, nobody has determined a good technique to halt the spread of cheatgrass. The paperbark is fortunately a difference story, perhaps as a lesson that "the bigger they are, the harder they fall", and managers in Florida have found effective ways to control its impact. 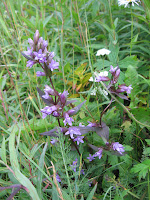 Some invasives are likely here to stay, such as russian thistle. Trying to eradicate it would be like a game of whack-a-mole across an entire landscape. Other invasives are specific to smaller regions, such as Australian Pines in the Florida Keys, and managers have a decent chance at eradicating it from the landscape.
As far as worrying about what "natural" is seems less of a problem for most land managers. Biodiversity and ecosystem integrity are the goals, and ironically some of our ecosystems benefit from manmade disturbances. It is well documented that most prairies, especially in eastern states, were maintained by fires set by Indians. Trying to put a tallgrass prairie in a bubble where no humans can maintain the landscape would likely result over time of it growing into a forest, which is called succession. These are biomes that require an occasional "reset" to maintain themselves or they slowly fade into something different. Of course, even the best intentioned researcher can create a disaster, such as the accidental introduction and spread of chytrid fungus into a nature reserve. Considering that many protected natural areas were created in response to a rare species, spending time and effort to counter threats such as invasives to their existence is certainly resources well spent.

Recommended reading: "And No Birds Sing: A True Ecological Thriller set in a Tropical Paradise"
Posted by Mangrove Tom at 4:34 PM