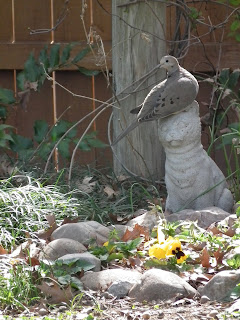 Calm down; there's still 5 more days to log your Great Backyard Bird Counts (although the observations must be for dates Feb 17-20th). Almost 100,000 lists have been submitted for this year, which is a record setting pace. It's always fun for a bird nerd to peruse the past results, and this year's interesting bird is the Snowy Owl with a record number of observations. I had read in December from several sources that this winter was likely going to have an unusual irruption of Snowy Owls, which might be due to a predator-prey oscillation. A great example is it is the first time a Snowy Owl was ever seen in Hawaii, and there was even one spotted near my winter foraging grounds in Texas!

Our GBBC list was not the best this year, since we didn't record some of our regular visitors over the weekend (downy and red-bellied woodpeckers, and white-throated sparrows have often made our list). My favorite was going to a nearby pond by the library where we counted over 70 Lesser Scaup! We also saw some American Widgeons hiding among the Mallards, and like the Scaup, will be migrating north soon. Since central Texas experienced record drought over the summer, I was concerned how this might impact migratory bird populations. I don't know how accurately the GBBS counts can be used to track population counts from year to year, but it was comforting to see the species counts were at least very similar so far.

Oh, and speaking of migrating north for the summer, so are we. I'm going for a 3-peat season at MEVE! 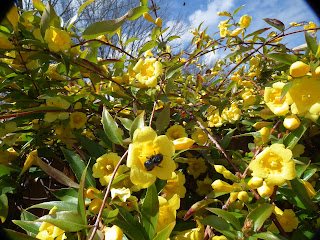 viable seeds. I had read a book called The Forgotten Pollinators and one of the topics about the Allee Effect made me consider if it could be the reason behind the inexplicable range of Schmoll's Milkvetch. Schmoll's Milkvetch is an endemic for the park, and grows only on a few mesa tops. There seems nothing particularly special about its habitat requirements, which made me wonder if the fruits are not viable due to lack of proper pollination. If so, is the lack of pollinators because there are too few plants left to support the pollinators? We hope to do a few experiments and determine if Schmoll's requires a pollinator to cross-fertilize the plants. If it does, it would be interesting to find out who it is (or was), and if the pollinator needs protection along with the rare plants. There could be other reasons for the limited range, but this research has never been done for Schmoll's, or any of our rare plants for that matter, so enlightenment awaits! Stay tuned for more exciting details!!!

As if anticipating my research, our Yellow jessamine-trumpet vine flowered like crazy and attracted a bunch of these pretty green-metallic halictid bees in the photo. Extra credit to anyone who identifies them.
Posted by Mangrove Tom at 5:15 PM

Ya know, you're really making me work here. Schmoll's Milkvetch? The Allee Effect? (is that a movie?) Lesser Scaups? (they prefer to be called Size Challenged Scaups, btw)

Which brings me to irruption of Snowy Owls. While I'm sure that the predator-prey oscillatory effort might contribute I would think that weather was the main factor. By all accounts it was a very mild winter. I should think that the milder weather would prompt more activity during the winter months of both prey and predator - not to mention that milder weather might encourage more birding observations to take place.

Well, be safe during your own migration. It is my hope that I can catch you guys up there during late July or August when the family abandons me for Guatemala for a couple of weeks.