How To Know You're in the 21st Century 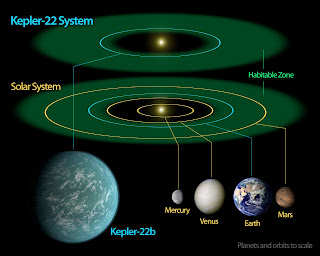 And now it's time for something completely different. Every now and then, I come across something that makes me pause, maybe get goosebumps, and maybe even say something profound such as "duuuuuuuuude". A few good examples would be the sequencing of the human genome (happy DNA day on April 20th!), pushing the frontiers of particle physics with the Large Hadron Collider, or merging the boundaries of technology and art to create wonders...

But perhaps the best indicator I live in a new century: The Extrasolar Planets Encyclopaedia

761 planets and counting (image courtesy of NASA/JPL). These are just the confirmed results; Kepler has another 2,321 candidates in the queue and that number will keep climbing. Considering Kepler's field of view is just the right wing of Cygnus, the number of planets awaiting discovery is, umm, astronomical.

What is perplexing is that despite the overwhelming success of Kepler discovering new worlds is that there appears to be no follow up missions. A delay might be explained by the James Webb Telescope going way over-budget and its launched delayed almost a decade. There were some difficult technological challenges with Darwin and the Terrestrial Planet Finder, but aside from JWT, NASA does not have any big exploration missions on the books. It looks like there is finally planning for a successor to Hubble called ATLAST, but it likely will not launch until 2030! Ouch! Perhaps that is being realistic, but it sure is a far cry from the Apollo-type mandates.

One ray of hope is shining from the ESA, who is proposing a follow-up mission to Kepler called PLATO. It will scan about 250,000 stars, so about 10 times the results from Kepler. It is not expected to launch until 2018. I suppose patience is a virtue, since by the time we can actually study these new found worlds we will have discovered over 20,000 of them!
Posted by Mangrove Tom at 5:55 PM