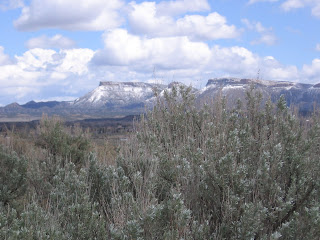 We're back for a three-peat season at MEVE! March has been warmer than normal, which has hastened the bolting of many early-season plants. The past two years, it had snowed on my first day of work, but this time it was 78 degrees and sunny. Very pleasant weather, except in the distance I could see the snow disappearing day by day in the La Plata mountains. That snow pack is needed for the summer wildflowers, stream flows, and the montane forests.

Before I had the chance to fully acclimatize to the altitude, we had the red-card refresher course. After a winter of very little physical activity, I was concerned how I'd do on the pack test, but I was able to finish the 3 miles with 5 minutes to spare. That afternoon, the winds kicked up into a red-flag warning and the forecast had called for gusts of 55 mph, so there was concern that a few field burns on agricultural lands would get away. Fortunately, we weren't called up for duty on my first day. Whew!

As luck would have it, the Four Corners received a decent snowfall over the weekend; a little over an inch fell on the Mesa and 4-8" fell across the South San Juans. That should help keep springtime green, and a little boost to the 48,000 baby pondos planted last week at our nearby national forest.
Posted by Mangrove Tom at 4:40 PM

Kiah anticipates that the late snow fall may help the flora of the pedocalic region for the time being.

We hope you guys are settling in well. We enjoyed camping at Lake Whitney last weekend and we're already planning for a camping weekend coming up to Garner SP for fun in the Frio.