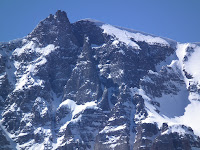 I hope everyone had a chance to take advantage of National Park Week: no entry fees!  It's nice being back, we saw a cattle drive going right past the entrance of Mesa Verde and while writing this entry, a pony-drawn carriage just went down the street with 3 girls. 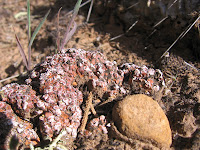 Since the spring here has been really warm, the plants are all running a week or two early... which makes us a week or two behind schedule!  We knocked out a few projects, the best of which was reseeding parts of Yucca House National Monument with native plants, such as Big Sagebrush, Four-Winged Saltbush, Globemallow, Dropseed, and a few others.  It rained that evening, so maybe they have a good start. 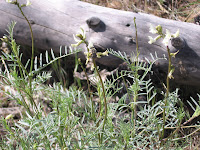 Another project has been identifying some of the species that form the cryptobiotic crust in the soils of cool, mesic environments.  My own research project also had to kick into high gear, with putting nets around a dozen budding Schmoll's Milkvetch plants.

My goal is to determine if Schmoll's Milkvetch is an obligate entomophile; a plant that requires an insect for pollination.  We were able to take a few nice photos of bees visiting the plant, so that is a good clue (free guided trip to Spring House Ruin to anyone that can name the species for me!).  Next is to determine if the plant can pollinate itself somehow. 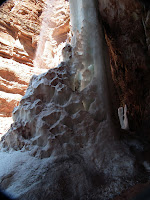 For fun, we made a trip out to Telluride to see Cornet Falls (aka The Frozen Throne) once again.  Despite being there more than 2 weeks earlier than last year, half of the ice cone had already melted away.  The snow pack around Lizard Head pass was substantially less too.

Fortunately, we had a little rain and snow over the weekend, so hopefully the wildflowers are going to have another great summer.  For now, the La Platas still their cloak of snow and the mountains look spectacular.