The Flying Monkeys of Zion 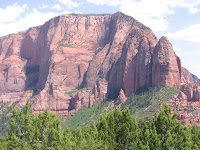 So there I was... surrounded by a scrum of scruffy fire fighters in a dimly lit garage in the shadow of The Sentinel, listening to a briefing of the surrounding hazards.  "So there's a huge propane tank behind the museum, and over here is the magazine for storing blasting caps that has a quarter-mile detonation radius, and this area over by Hurricane is called Monkey Fling Mesa and may have jet fuel and rockets..."  Yes, boys and girls, life is strange. 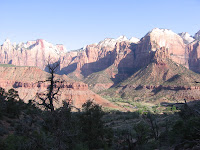 A crew from Mesa Verde had arrived at Zion National Park to assist with a 670 acre prescribed burn in the northwest area of the park to restore a ponderosa forest.  By the time we arrived, the weather forecast had changed; red flag warnings would be in place over the next several days along with above normal temperatures and relative humidity in the single digits.  Since the Rx-burn was cancelled, we were asked to remain in the park for the next few days to assist if a wildfire would occur.

Why is that area with the rockets called Monkey Fling Mesa, you ask?  It turns out that this area is where fighter jet ejection seats were designed and tested.  To ensure the rocket-seats were safe, chimpanzees were strapped into the rocket-propelled upholstery.   Therefore, at least one of my friends buttocks has benefited from a mach-1 monkey arcing 2000 feet above the desert floor.  Discuss. 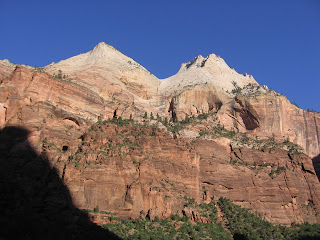 The final bit of surrealism was having our campsite below the Altar of Sacrifice.  Being able to visit Zion National Park for the first time was a real treat.  The scenery is as stunningly majestic as Kings Canyon and Yosemite, except it is out of sandstone instead of granite.  It should be on your bucket-list of places to see, and maybe it already is because the park gets in excess of 3 million visitors per year.  The campground was constantly full, so plan accordingly. 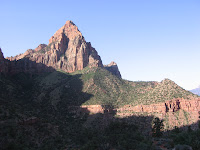 I really wanted to hike a little into the back-country, but since we needed to be close to the engines, our hikes could never get more than 2 miles away.  We were still able to see much of the valley, and did short hikes up the Watchman Overlook, Emerald Pools, and the end of the famous Narrows.  Near our campsite, little frogs would sing us to sleep while bats would wheel through the sky overhead.  We explored different parts of the park to familiarize ourselves with access roads and were able to visit Lava Point overlook and the Kolob Canyon Overlook.  Kolob Canyon looked amazing and still had pockets of snow 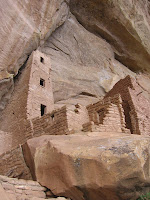 hidden in the crevices.  There's lots to explore, so I hope to return soon and hike around a bit -- maybe starting with Angel's Landing?


Meanwhile, back at Mesa Verde, we have begun surveying some of our plants of special concern.  This included a nice hike down the Square Tower House trail to look for Aletes macdougalii (Indian Parsley), and another fun hike to Soda Canyon near Battleship Rock to look for the endemic Hackelia gracilenta (Mesa Verde Stickseed).

This Sunday would be a great time to visit some of these parks, since there will be an annular solar eclipse visible.  Many national parks are planning events around this astronomical event.