The Road to Chaco

This past week, I had the chance to be a paleontologist for a day.  A road-cut along the main road in Mesa Verde exposes a nice outcrop of the middle Menefee formation units.  Recently, erosion happened and a few sandstone blocks tumbled down the man-made cliff onto the shoulder of the road.  Since this was an important outcrop (Menefee is part of the Mesa Verde Group, so this road cut serves as a Type description), we rushed down to describe fossils contained within the rocks.

For the most part, it contained wood fragments in various states of coal.  This area was once a swamp 78,000,000 years ago and this particular outcrop resembles a flood plain near the shoreline.  A few animal burrows were found; bark-beetle tunnels in the 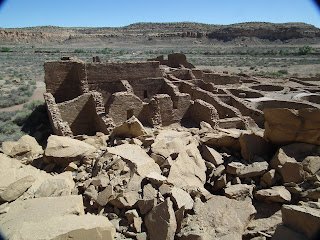 wood and what might be ghost shrimp burrows in the sand.  We found a good laurel leaf imprint, and a fossil that resembles an avocado (pending identification).   If you want to give it a try, you can see a few photos posted to my G+ account.

At work, we focused on rare plant surveys this week.  Three botanists from the Colorado Natural Heritage Program were here for their projects, and we tagged along.  We found new populations of Aletes macdougalii (Indian Parsley), and mapped a few areas of Hackelia graclienta (Mesa Verde Stickseed).  Intensive surveys of Astragalus schmolliae (Schmoll's Milkvetch) were also done.  I also found time to assist the wildlife biologists with some fence repairs.

For Memorial Day weekend, we went camping at Chaco Canyon.  I have been wanting to visit that unique area since I first knew it was out there... but it is way out there. It's surrounded by badlands, and to emphasize that point, we battled strong winds during the day.  It was so windy, tents from the campground were being ripped from the ground and gusts would sweep sand into your face.  It was so windy, the mystery on why the ancient Chaco people left the area didn't seem so mysterious to us.

Fortunately, Chaco is rich in mystery.  The Great Houses were the largest buildings in North America for the past thousand years and were not surpassed in size until the early 1900's.  They required 210,000 trees, most of which were cut, seasoned, and transferred over 50 miles.  Why was this amazing place built in the middle of Nowhere, when they could've built it along the banks of the San Juan or Animas river?  Just reaching Chaco on foot back then must've required a carefully prepared journey, so maybe the remoteness was to enforce purpose on those who wished to visit?  They certainly didn't try to hide it, since huge effort went into creating 400 miles of ritual avenues that led to Chaco from many different directions.  And this is just the beginning of questions about Chaco that continues to vex archeologists.

When the sun set, the winds settled down and allowed the campfire program about archeo-astronomy to be held.  It was an interesting talk, and presented some intriguing sites all along the canyon; such as the solstice Sun Dagger Petroglyph and the Supernova Pictograph.  After the talk, volunteers setup huge telescopes at the observatory so we could see M-51 (the Whirlpool Galaxy), M-13, and Saturn with its entourage of moons.

We spent out last day on hikes up to Pueblo Alto and down canyon to see more petroglyphs and a few more Great Houses.  The wind really tore into us and we felt baked at the end of the day.  I'm glad I didn't have to walk the Great North Road back to Mesa Verde!  Now it's time to enjoy some Chacoan food:  chocolate imported from central America!