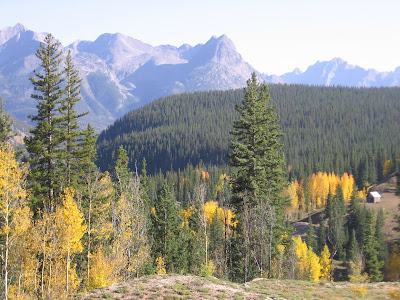 Summer was gone and the heat died down
And Autumn reached for her golden crown
I looked behind as I heard a sigh
But this was the time of no reply.

The trees on the hill had nothing to sayThey would keep their dreams till another daySo I stood and thought and wondered whyFor this was the time of no reply.Time goes by from year to yearAnd no one asks why I am standing hereBut I have my answer as I look to the skyThis is the time of no reply.  -- Nick Drake 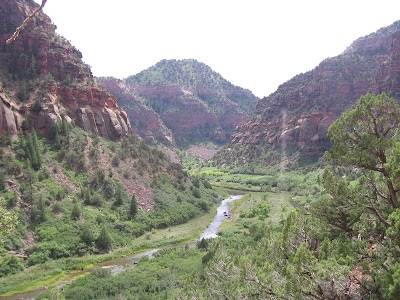 The Equinox is here and the aspens at the higher elevations have already spun their bright gold.  Morning's here are already chilly, so I need to dress for 3 seasons each day.  On the first cool day, we went for a short hike down the lower Dolores River Canyon.  It is like a miniature Grand Canyon experience (excuse the oxymoron); towering red sandstone cliffs capped in white with white and a tiny river flowing down.  We saw an osprey, and at the overlook was a family of white-throated swifts zooming around the cliffs like fighter jets.  The swifts would SWOOOSH right over your shoulder, occasionally starting you to watch them instead of the sweeping vistas.  On the way home, we stopped by Lowry Pueblo with the intent to hide a geocache there.  Every place we thought might make a good hiding place had artifacts on the ground, so decided against it. 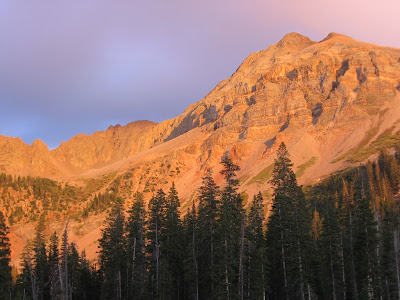 The next weekend, I went for a hike up Owen's Basin in the La Plata mountains.  The aspen there were still green, but there were a few groves that had already turned a luminous autumnal orange.  When I arrived at the basin, I saw the Mountain of the North, Dibé Nitsaa, in bright sunshine.  Each time I've been near this mountain, it has sent me discouraging vibes:  rockfalls, snow, storms, tired feets... this time it beckoned.  Even the route up seemed obvious on a mountain that has few obvious routes.  By the time I reached the summit, it was shrouded in thin clouds that swiftly flowed around the summit, making me feel like the summit was moving in a sea of clouds.  Sometimes gaps in the clouds provided views of Mount Moss, Centennial, Durango, and Mancos.  Then a pair of sharp-shinned hawks circled the summit, with one flying straight towards me with a loud SWOOSH as he flew just overhead.  Right after that, the cloud deck lifted quickly, where I could see Sleeping Ute, El Diente, Engineer, and the Needles far in the distance.  A few huge clouds the size of an ocean liner would come sweeping down at the summit, giving the sense it would crash into me with force -- but instead would just wrap around like a light mist and pelt the ground with a few white gems of sleet.

I made my way down along a faint trail and misunderestimated the amount of time required to get back.  Darkness fell, and I neglected to bring a light to save weight in my pack.  I reached the river fording at dark and was scared outta my shoes by a cow-bear!  (a black angus that spooked out from the willows and for a split-second I thought was a bear).  I got back to my truck and noticed some mud and my side mirrors bent -- darn meddling kids!  In the morning light, I realized the mud had huge paw marks on them: there was indeed a bear o'er there!