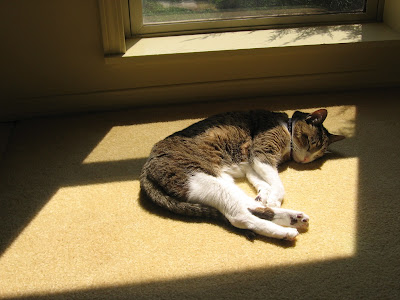 This is Pumpkin, aka Squeakers.  She was born in October 1993 and died September 13, 2012.  We already miss her a lot, since as her nickname suggests, she was very vocal about what was going on.  The house is much more quiet without her always getting in the last word.

All our old cats went through varying degrees of renal failure.  Just a few weeks ago we noticed her behavior change; she always begged to go outside to eat grass like a little lamb, watch bugs, and sniff the air.  Instead of eating grass, she just wanted to lick rocks and eat dirt.  We decided she was trying to compensate for something going on in her body, so we took her to the vet for blood tests which showed her kidney disease had become much worse and they could not keep up anymore.  We tried phosphate binders and medicine to help her appetite, but it didn't help enough to overcome the kidney problems.  We helped her along as much as we could, but she just became too tired to move on her own and lost more weight. After consulting the vet, we let her die without more suffering. 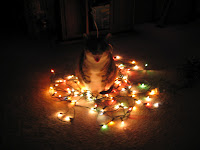 Pumpkin was a tiny cat, but had a huge heart.  She was incredibly fierce and not afraid to back down from anything;  the kind of cat that would chase bears out from the back yard.  If we put cat-nip out, I was concerned for the safety of our other pets!  Despite being half the size of our other cats, she defended her food bowl and scarfed food down so quickly she often pushed other cats aside to eat theirs too.  There was even one occasion where she snatched a huge piece of pizza out from the hand of a guest!  Mostly, she enjoyed lying in the sun, playing with her little sockie, and eating grass.

We buried her next to George.  It's a sunny, peaceful spot in a mountain meadow that catches the morning sun... and has lots of grass for our little lambie. 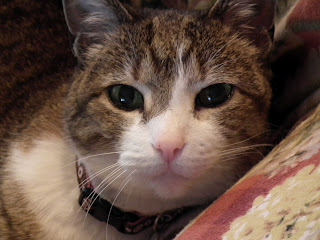