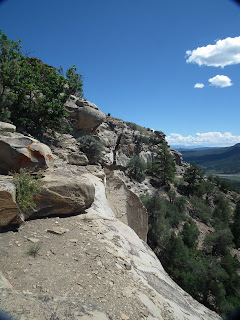 So there I was...  following game trails on a hot, august afternoon, trying to find my way across Wildhorse Mesa on tribal land to reach a wildfire.

I was part of a type-2 crew that was organized to fight a few wildfires that cropped up in the Four Corners area.  Most of the full-time wildland firefighters in the area were deployed to big blazes burning in Oregon, Idaho, and California.  Our crew of 9 only had 2 full time wildfires, 3 members of the Mesa Verde natural resources department, 1 archaeologist, and 3 auxiliary members of the Ute Mountain Ute fire department.  Each of us carried a full line-pack with over a gallon of water, and I swapped with another guy carrying a shovel with 3.5 gallons of water on the end and a chainsaw.

We bushwhacked up a canyon and passed the empty windows of several cliff dwellings.  Most of the ancient Puebloan sites here have not been visited in a long time, since the Ute Mountain Utes typically only allow access to some of the more showy and accessible ruins.  We also passed by a wonderful sandstone arch that had a scattering of pottery sherds lying enigmatically on the ground.

Hiking back up to the final mesa to reach the fire really tuckered the crew out, but the wind had settled down and allowed us a chance to battle the 1 acre blaze.  Our closest air support was the Wyoming border, so we were essentially on our own.  We made decent progress putting in a control line around the main fire, and our Law Enforcement lookout posted on the adjacent mesa noticed that there were two spot fires just below the mesa rim.  We split into 2 groups to hit those spots.  The one we worked was on a steep slope that allowed burning logs to roll down, so we dug in a cup trench and lined it with rocks to stop the slop-over. 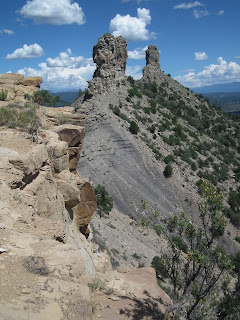 We were all hot, tired and sweaty as the sun went down.  We had no camp gear, and the canyons were too steep to safely bushwhack 5 hours at night by headlamp -- even if anyone had the energy to do so.  So we camped as the coyotes do, finding a cozy spot in the deep duff of an old Utah Juniper, and went to sleep watching distant lightning flash in far-away Arizona.

One perk of setting up a spike camp with no gear is that its considered a hardship (rightly so), and we actually got paid to "sleep".  I think I managed to doze off a few times, and at least 2 of the Navajo sleeping near me were able to get some sound sleep.  Whatever rest I received was enough, because I was able to shake off the soreness and hike out without too much complaining.  After hiking out and drinking our fill of warm water stashed at the truck, we stopped at the Far View terrace for an ice cream cone.  I recall a story by another Tom from Florida about the psychological importance of ending a tough experience with a pleasant one, as it softens the memory.

So we return to the fire cache and begin rehabbing tools, when the chief walks out and says there's another fire in the park.  We all exchange glances and realized we aren't going to get any more filthy, so off we go to Sun Temple ruins in Mesa Verde to put out another fire.  Fortunately, this fire is just off the roadway.  The storm that created it is fortunately still raining on it, keeping it suppressed.  Unfortunately, it is still tossing lightning bolts everywhere, so after hiding in the truck for a little bit, we decide to return an hour later... with a pump truck.  We hose it down with a solution of foam... so much easier than cutting, digging, and scratching control lines. 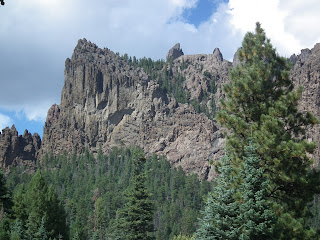 But no rest for the weary.  The next day we rode down Moccasin Mesa road to fight a small blaze near a beautiful rimrock pour-off at the head of Pine Canyon.  Our archaeologist was excited by the ruins in the canyon below, and there were plentiful lithic fragments and other artifacts in the nearby woodland.  As the 2nd-string militia works through Saturday chasing fires, we were finally called up to the helibase at Mesa Verde to potentially fly out to a remote fire.  Finally a crew arrives from Kentucky to take over operations, ending an exhausting week of overtime... but no fly time for me. 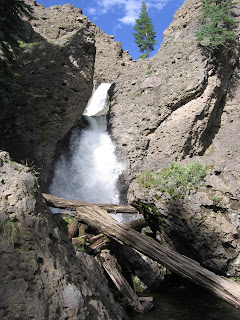 Work has had some fun moments too; working with the Southern Colorado Plateau Inventory and Monitoring group again, which is always a good time to learn new plants; finding new occurrences of rare plants such as Grindella arizonica and searching for populations  of Iliamna grandiflora that hadn't been surveyed in nearly 30 years; and vouchering a new species to the Mesa Verde herbarium of Sanguisorba minor.

All this hiking on the job has made me lazy on the weekends, and the monsoons don't make it any more tempting to reach the back-country.  Instead, we chose an easy hike to Piedra River Falls and a guided tour of lonely ruins atop Chimney Rock National Monument.  Wildlife has not been lazy, with many bears active in the Park eating chokecherries and acorns.  Elk, deer, hummingbirds... everything seems to be on the move now, getting prepared for autumn.  In a way, we are too, already making preparations for our remaining weeks here.  I'll want to make the most of the beautiful a

spens and hopefully some snow-covered peaks.

We just saw Ken Burns's documentary on America's Best Idea, and I realized there are sooooo many National Parks we've never been to.... and ones we must return to....