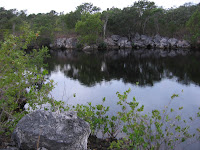 Sorry for the delay in updating the blog. Time moves strangely in the Keys, sometimes slithering away under the rocks before you realize it. We spent the past two weeks again at Crocodile Lake National Wildlife Refuge, sweeping transects along the area. The photo here is a great landmark to search for if you're using Google Earth; it's locally refereed to as "Whiskey Bottle Lake", because it's artificial shape looks exactly like a bottle. The photo here is of the "neck", where Ralph said Crocs often hang out. I never had the chance to see one, but only had one opportunity to visit it. If you don't have Google Earth, you can refer to this topo map; in the upper right, the lake is shown as a rock quarry, and our transects were done about 1 mile to the southwest. The Keys generally do not have much topographic relief, but this area was once slated for development, and in areas where they were dynamiting canals, there were huge boulder piles 30' tall. We dubbed one Mt. Croc, since we believe it to be the highest point in Key Largo. It's tricky crossing, especially carrying a bottle of Garlon, a 30lb bag of lead tree & latherleaf seeds, handsaw, compass/trimble, and in the rain.

There's also sinkholes. Once while regrouping by the truck, a local stopped by to chat and 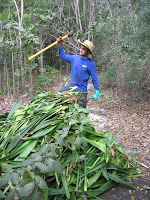 warned us to stay within shouting distance since there's some pits that get covered with sticks and leaves and can trap someone. I personally saw an uncovered one with ~15ft vertical drop, so I believe him! One of the more unusual experiences was treating Queensland Umbrella trees that grew atop the boulders. It's a beautiful tree, with roots that grasp the bare rock. To our knowledge, it was the first time that a grove of those trees had been found in the interior of a hammock. All transects that crossed to old development encountered huge swaths of invasives, most we hadn't come across, such as huge Royal Poincina trees. Here is a great photo of Toto, the mattock meister, standing atop a mound of Sansevieria inspired by our ecological progress! He hauled in that mattock over 1 mile across very challenging terrain, which in itself is an accomplishment! I don't have as many pictures as I'd like of Croc Lake, because it rained often enough to make me worried about the health of the camera.

We saw a cornsnake and a black racer, but no pythons. On our last full day there, we spent the afternoon at a conference organized by The Nature Conservancy on Marathon Key, where a new program to combat the pythons was announced. It builds upon the existing "Don't Let it Loose" program that is receiving federal funding to control invasive animals in Florida. FYI: here is a fun quiz that covers hardwood hammock species (on the last page). Dr. Snow from the Everglades presented his research on the python problems in Florida (which included a slide titled, "Snakes Under a Plane"). Some interesting facts are: pythons can eat up to 80% of their body weight in one meal (my equivalent would be eating a 136 lb burger! URP!). They can grow fairly quickly and get huge; the public took notice when an 8ft Burmese was found close to the local elementary school in Key Largo! Readers of my blog will be glad to know that I am not supposed to handle wild pythons, my job is to call 888-I'VE-GOT-ONE, and then take a picture. I'm not too worried about snakes in general, having spent gobs and gobs of time outdoors in prime snake habitats. I've seen lots of rattlers, copperheads, moccasins, and other non-poisonous snakes, and not one has ever been aggressive. According to a research article I read in Natural History, nearly all snake bites occur to young males (20-30 yrs old) that were hunting; 50% of those accidents involved drunkeness, and another 30% involved handling of the snake... so one might argue that maybe snakes are just trying to help humans clean out our gene pool. However, Dr. Snow presented two slides that managed to strike fear into my heart: the 1st slide showed wild python kills per year... which was flat until 2003, when suddenly the chart begins an exponential growth curve. That slide indicates that pythons are essentially out of control in Florida, and there's no estimate to how where the population will peak (some places in Asia have densities of 1 python per hectare!!!!). Wow, so it looks like Florida has a serious snake problem... but the next slide was even scarier; it was a projection of the python's potential habitat in the USA, and it includes the entire south-east USA, from Texas to the Carolinas! 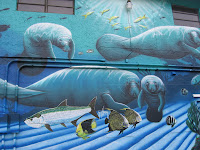 After that meeting, we took out truck to deliver a couch. We picked it up at the Dive Museum in Islamorada (the house is above the museum). How'd you like your home to look like this? There were paintings of corals and whale sharks too, but I've never seen a manatee, so I they are my favorite. Tomorrow, I'll post some photos from my last dive trip. Meanwhile, it's time to catch up on the news; the primaries are going on in Florida, but I've not been able to keep up with the "real world".
Posted by Mangrove Tom at 10:17 AM

just an FYI: I've begun adding hyper-links in the blog, so you can click the words in BOLD GREEN letters to learn more about the topic. Editors at Mangrove Tom Today are always looking for ways to improve the journal, so send in your suggestions today!

I love the painted house. Now Tom, don't get drunk and handle snakes. I liked your umbrella tree link. A few people in my office have umbrella trees in their office. I think none are aware (neither was I) how big they get. At least one potted plant in the office is touching a 10 foot ceiling and has gotten too large to move!

I just stumbled across this fun news article about Dr. Snow's job:

very good article on the doctor,