Winter Arrives in the Florida Keys! 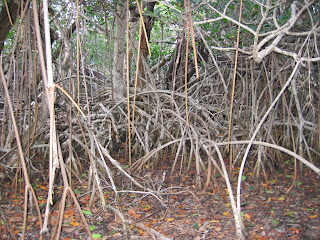 Along with the lower 48 states this first week of January, Florida was hit with the powerful cold front. It didn't snow or freeze, but the wind stayed very strong for over 3 days. It churned up the bay waters, which are still murky two days after the waves finally quieted down. Key West broke the coldest temperature record, which was set in 1898! Despite this week of cool weather, the winter has so far averaged above normal temperatures.

One strange aspect of the cold is the effect it has on our cold-blooded critters. Iguanas, anoles, and other lizards were falling out of trees! We stumbled across a cold-benumbed iguana last week in our sweep through the Blue Heron Hammock. These lizards are considered a nuisance, so we captured it and had placed it in a bag to take to the Florida Fish & Wildlife and make it their problem -- our first invasive animal we "treated". We went back to work, leaving the iguana in the shade of the truck. When we returned 4 hours later, the iguana had escaped. The day warmed up enough for it to realize it was in trouble and needed to get moving. 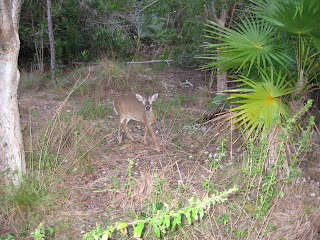 We're almost done sweeping through that hammock, which is good news, since it is tough going and wearing us out. It will have to wait awhile though, since we'll be working in Key Largo and Tavernier Keys for the month of January. The iguana was good practice, since we may well be encountering the dreaded pythons that must be captured (not by us, we just call in experts and help). Of course, the crocs and alligators, being native & protected species, are welcome to be fruitful and multiply. Alligator populations have rebounded nicely, however the crocodiles have not.

Over the weekend, I was able to do some birdwatching and was lucky enough to see my first life-list bird of 2008: a yellow-throated warbler chipping in the cold wind atop a coconut tree. Other birds I saw for the first time in the Keys were: yellow-crowned night heron, northern cardinal, and a flock of blue-winged teal. Lots more tourists seem to be down this time of year too, probably escaping the cold north just like the warbler.

Time to pack for my adventure next week! 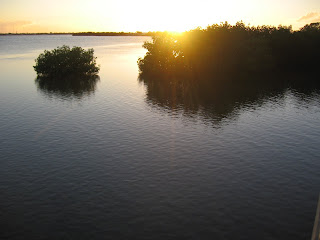 thanks for keeping us up to date

Walking thru the swamps w/ creatures falling from the sky.... would make a good Dr. Who episode!