Snakes on a Plane! 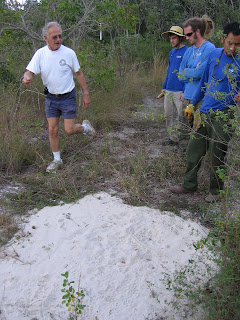 One book I read last year was "And No Birds Sing: The Story of an Ecological Disaster in a Tropical Paradise". It's an interesting story on how invasive species can unexpectedly and quickly create a crisis. These thoughts were forefront in my mind as Steve from Florida's Fish & Wildlife handed us "Python Hotline" cards. One of Steve's important charges is the welfare of the Key Largo Woodrat. These cute animals build nests in rockpiles or other debris, using sticks and grasses to line a cozy nest and gather seeds. Recently, a huge python was found with no less than 7 rats all lined up in its gullet. Considering there are fewer than 500 woodrats, it's pretty clear that this predator is creating an imbalance.

Ralph is one of the highly energetic and dedicated volunteers that work's with Steve on how to help the woodrats. He has devised artificial nesting cavities with good success. The hard-to-get photo of him shows him demonstrating his technique for tracking another exotic invasive even deadlier than the python; the house cat. He uses the sand to check for cats using the path, then traps them to hand over to the shelter. Despite both Steve and Ralph being animal lovers, the pythons really don't have a future if they're caught - they are slowly chilled in the fridge to sleep and then killed. Other team members in the photo are Bossman Hau (aka, 'the Narwhal'), Topher, and Toto. 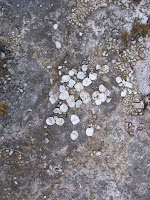 Ralph also said there are crocodiles in the nearby lake, so I'll try to get a picture of one this coming week. We did see the remains of one poor croc on the shore, and I took a photo of the bony plates left behind (I don't think alligators have these plates). Living in the trailer was nicer than expected; there was even a TV (with one channel). The hammocks there are a nice change of pace too; lots of different native plants. Lead tree is the biggest problem we've encountered, and we've knocked out thousands of em. We also came across a huge stand of 30' tall Burma Grass. We also had the benefit of working with 2 volunteer students from Oberlin college; John and Mike.

Friday, it rained all day, but I was able to sneak out for some adventures. Saturday, i attempted to track down US geodesic benchmarks to report their status. I visited the site of the abandoned ferry on No Name Key, and found the foundations of an old house and water tank. Unfortunately, I didn't find any of these benchmarks, except for the ones already reported as found on the Bogie Channel bridge. I did get the chance to do some birdwatching and exploring; seeing a blue-gray gnatcatcher and a pair of yellowlegs in the swamp. The yellowlegs in this photo are only about 100' from where the benchmark listed above is supposed to be, but I saw no sign. Maybe I'll return one day with waders! 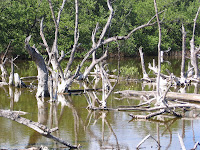 Today, I bought passage aboard a dive boat to Looe Key for 3 dives. There were only 5 other divers aboard. One couple was from New York and studied invasive plant ecology! He had even worked some in Big Bend and Santa Monica. (sing: it's a small world). I dove with Brandon from New Jersey and Stefan from Big Pine. Brandon saved my dive by letting me borrow a flipper, since my strap broke! We had great weather, visibility, and hot dogs.

We saw HUGE barracuda, stingrays, dolphins, and I was able to name 48 species of fish (and I'm no ichthyologist/fisherman!). There were lobster and sea urchins hiding in nooks, and snooks were in school, massive green parrotfish, sleeping nursesharks, 3 green morays, 1 golden-spotted moray, and lots of others! The highlight was following along with sea turtle (hawksbill?), and being circled by 2 reef sharks!!! I'll have to compile my dive notes soon and submit a report to REEF. I also hope to update this blog with some underwater photos. Maybe I should buy a housing for my Canon?

I noticed it might snow in Dallas this week... but we'll be in the 70's here in the Keys!

This last image is of some lizards who share the shelter of a woodrat's nest: 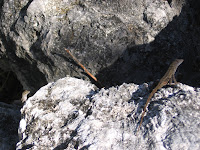 Over and out! -- Mangrove Tom