International Year of the Reef 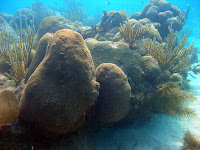 2008 has been designated by ICRI as an International Year of the Reef, so today's blog is dedicated to IYOR!

Two weeks ago, I went out with the Looe Key Reef resort. They hosted the trash cleanup last December, so I felt like rewarding them for protecting our reefs. It was just a small group of 5 divers and 1 snorkeler, which gave me a chance to meet all the friendly folks. One of my dive buddies was Stefan, who has copyright on all these photos in today's blog. 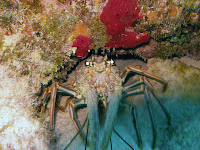 Looe Key Marine Sanctuary was created in 1981 to protect what is considered to be one of the more spectacular reefs in Florida. It's a nice, shallow reef, with a max depth of only 30ft. It is named after the H.M.S Looe (the 3rd), which was a 42 cannon government-sponsored privateer frigate. On Feb 4 1744, the Looe spotted a small Spanish vessel that was identified as a former British merchant ship. They captured the ship and began towing it back, but in the dark of night they crashed into this reef; even after dumping all the cannons and ballast, the ships could not be freed and the 274 crewmen all crammed into longboats for the long haul back to Jamaica.

The reef is a Spur-and-Grove formation, which means the corals grow along ridges (spurs) and 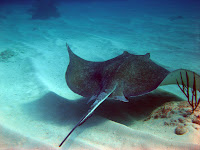 the groves are channels of sand. Spur-and-Grove is a characteristic pattern of shallow reefs, but I don't know why they form that way. My guess is that as corals grow higher, eventually a storm breaks loose some large fragments which begin banging around and destroying other corals. The healthy coral continue growing up, leaving the rubble in a trench that increasingly becomes the danger zone, eventually wearing it down into a sand channel. Considering most of the groves run parallel, it seems like wave action is more important than local topography, and makes this pattern appear on nearly all shallow reefs. 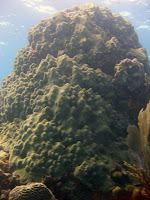 Coral reefs are formed through the slow, patient growth of Stony Corals. The importance of these reefs cannot be understated; they are some of the most diverse and productive ecosystems, but also over eons of time create land. The Florida Keys themselves are the top portions of the reefs from 7,000 years ago, when sea level was higher, and the current living reefs offshore are the breakwater that keeps large ocean waves from destroying the low-lying islands. In Texas, ancient Permian reefs are the backbone of our highest mountains in Guadalupe National Park. Stony corals create these massive landforms by one tiny animal at a time, each grabbing carbon dioxide from the water, combining it with Calcium to form their skeleton. The photo here is of Mountainous Star Coral, one of the more important reef builders in the Caribbean. 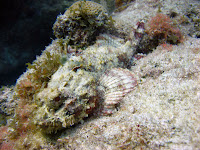 But the reef is also critical habitat for many species of fish. Most fish use the reef when they are young, since it provides lots of hiding places. However, some fish, such as this sneaky Spotted Scorpion Fish, live their entire lives on the reef. The Scorpion, along with Stone and Frog fish, use very cryptic coloration to lie in wait for something small to swim in front of them and literally GULP them up! 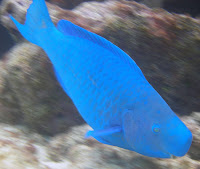 Every coral reef is visited by a very distinctive type of fish, called Parrotfish. These fish get their name from the fused row of teeth in their powerful jaws, which resembles a bill. Parrotfish have such a powerful CHOMP that they literally take bites out of rock and coral. This Blue Parrotfish is an uncommon fish to see, but he also has the large "bill" for the mouth. The juvenile Blue Parrot looks nothing like this; they are small, slender pale-white fish with a yellow head. The most common to see is the Stoplight Parrotfish, who get their name because they change color from red to green! Parrotfish are also one of the few fishes that are known to sleep, they literally lie down in a quiet place, pull up a mucous-blanket, and dream of algae salad.

I probably don't need to tell you the name of this fish..... that's right, it's a Neon Goby! Oh, you 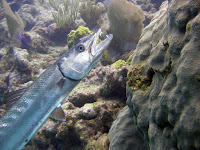 were staring at the Barracuda with the sharp, pointy teeth? Well look closer, near his "eyebrow" is a tiny, neon-blue fish. This barracuda is visiting the reef's equivalent of the dentist, which is known as a "cleaning station". Many large coral & sponge formations are inhabited by a type of Goby or Shrimp that specializes in cleaning gunk and parasites off other fish. The barricuda will sit patiently with his mouth open and let these tiny fish swim in and out to clean their teeth and gills. This strange behavior is a form of symbiotic mutualism; big fish keep healthy and the cleaners get a tasty snack. 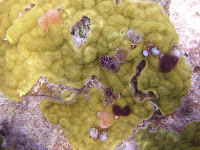 Another strange animal found on the reef are Christmas Tree Worms. Somehow they find a way to burrow into coral and make their homes. They extend these modified gills above the surface to catch small particles of food. I really like 'em because they come in such a variety of colors and patterns; why do worms care how pretty they look? They're also very alert to motion or pressure changes, 'cause if you get too close - ZIP - they all yank their Christmas Trees back inside the house and become instantly invisible! Other free-swimming marine worms, like nudibranchs, are so vividly colorful they are like the butterflies of the oceans.

Sponges are another weird animal; really they are a loose colony of animals like a coral, yet they build often complex structures and come in a bewildering variety of shapes, colors, sizes, and textures. Sponges are filter-feeders; they take water in from the sides and slowly expel it from 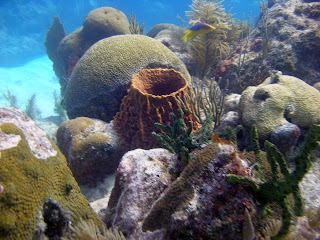 the large opening, catching microscopic bugs to eat. In the center an orange Giant Barrel Sponge, which can grow big enough for me to hide in! The vibrant green branching stuff in the foreground is also a sponge, the Green Finger Sponge. That's another thing I like about sponges, their names are also accurate descriptions -- compare that to stupid fish names, like the Spanish Hogfish above the Barrel Sponge; he doesn't resemble anything like a hog and I've never heard it speak a word of spanish. My favorite coral is behind the Barrel Sponge, it's the Symmetrical Brain Coral. I appreciate the intricate and alien mazes that brain corals make, and they are another important species in reef building. Growing at the right-base of the Barrel sponge is a Split-Rope Sea Rod, and the feathery-duster-looking thing behind it is a Sea Plume -- both being common types of Octocorals. Often these are called soft-corals, but that is incorrect: these guys are Gorgonians (their hair are made of 8 tiny snakes). 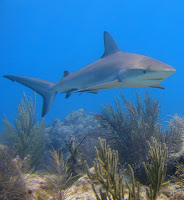 Here is another quiz: what fish is this? That's right, it's a remora! (look under the belly of the shark). Surely one of the highlights of the dive were seeing all the large fish, such as the Goliath Grouper, a couple of sleeping Nurse Sharks, and the stingray hiding in the sand (photo is above, flying away). We also saw a pair of Reef Sharks that were actively swimming about. They circled the three of us, but since we didn't act like food, they left us alone. Sharks don't have the best vision, but will often attack swimmers on the surface because they resemble wounded prey. It's probably not advisable to have stinky chum in your pocket either. I also saw 2 large moray eels and a spotted moray, which are always interesting fish to watch. 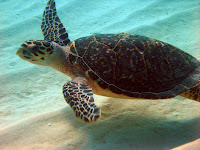 The absolute highlight of the dive was swimming alongside this very tranquil Hawksbill Sea Turtle! Sea Turtles are now very rare, since people have gone crazy eating adults, eggs, and then "developing" the nesting beaches. They are beautiful animals to watch swim, and are some of the most ancient survivors of evolutionary history -- their design is almost unchanged for over 150 million years. Another thing I like about these friendly beings -- they are the only known predator of stinging jellyfish! 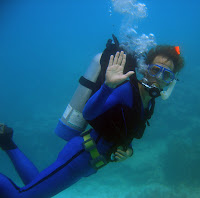 Tom, those pictures are awesome, I loved them and so did my kids.